No, funny things men do to reach women’s pants. Damn, let me remind you men that women are as horny as you are and you don’t have to resort to funny stunts to get laid. They want it as much as we do but at least women are not as blunt and careless in their quest for sex as men are. Females are crazy too but there are more crazy men than women in dating. We can’t get enough of stories of men sending hundreds of thousands to stray women who end up ghosting on them. What do you expect of people who ask for money 10 seconds after introducing themselves on social media?

That’s like picking a stray puppy from the roadside and keeping it as your pet, it might be a young wolf that separated from the flock and got lost. Then it grows up to just eat you one day. If you want a puppy, just go to a pet shop and buy a legit one with a known pedigree.

To kick off my list of weird, silly and darn crazy things men do to get together with women, is this obvious harmful thing;

Sending A lot of Money for Uber/Fare

How much is cab money anyway? Past Ksh 600 and that is something else. It is just a transaction. I wonder which part of town that girl is stuck in that requires 3K for just Uber. Uber and Bolt are not expensive means of transport, is she booking a flight from Kisumu to come and see you or she is just in CBd coming to your place in Nairobi West? You should be avoiding girls who can’t even afford bus fare or a simple taxi ride. However, men have decided to be ‘understanding’ and they are willing to part with a few hundred shillings when they want to see girls abruptly. If it is a girl you have been seeing for a while, it is okay to send her a little fare if she doesn’t have and didn’t even plan for the meeting. I suggest you avoid sending fare for first time meeting, you can lose your hard earned Ksh 500 just like that.

Why would you go to another country just to get laid? I know a guy who once went to Ethiopia, Shashamane just to get some Ethiopian booty. I think I would do the same considering that Ethiopian women are fine like a diamond. Those ladies are hot. I actually know of guys who just want to live in some countries because of the women; Columbia, Puerto Rican, Romania etc. When you see a man or woman travelling to some exotic part of the world for a holiday, getting laid has a little bit of something to do with it.

I am not surprised by this, it is not even a crazy thing as such because most moves men make, be it business wise or political wise, getting laid has something to do with it, even if it is a little. You want to be a famous politician so that men can respect you and women to admire you and get excited by you.

However, you should be able to get laid in your country before changing nations just to get booty. You are crazy if you think game will be easy in that island you visited for holiday. Anyway, if you are a foreigner in that country, it should be a little easy. White guys easily get chics in Africa.

I don’t know who told men they have to pretend around women and play tough. Most men would go from 0 to 100 if provoked when they are with a woman. It is okay, we understand you don’t want your woman to see you as weak but getting into petty fights so that you don’t look ‘weak’ in front of a woman is just lame. Chics are not dumb, they can tell when you are being unreasonable and acting. Women know tough guys, you don’t have to fake things to impress her. I am sure she has been with tougher guys than you so cut the bullshit. Tough people are naturally intimidating and you can just tell, they don’t get into petty fights because nobody brings them bullshit. They rarely get that vibe from people. I think I am tough! 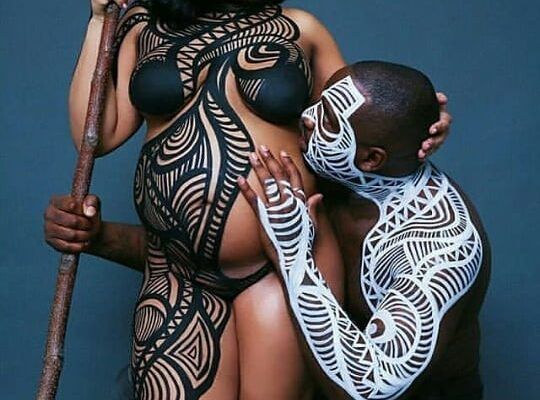 Are you KCB or Stanchart? And why are you giving a gal that ksh 1 million loan and yet she has never handled that kind of money in her life. When it comes to these huge amounts, you will find people in the high society borrowing each other this kind of money because they can easily repay. But for hustlers damn, I don’t know. Even spouses can’t borrow from each other that much. Women also do this, giving boyfriends hundreds of thousands of loans and the dude struggle forever paying it back or never pay it back.

If your credit is good enough, you should be able to approach a financial institution and get that 1 million loan, but because your credit is messed up, you have to borrow it from people or spouses. I don’t know what your cheque looks like but I would think carefully before giving someone even 10k especially in this January.

Having 5 women you are calling wives. How can you satisfy 5 women, I can understand having two or three girlfriends but I can guarantee you that keeping many women happy is going to be some work. How will you manage 5 women and you still have other responsibilities to catch up with. I suggest you marry one woman. You can have many girlfriends as a young dude but just marry one when you want to settle down. It is for your peace.

Men like women I know. I also do enjoy the company of beauties. I appreciate nice legs and pretty faces. The best option I can give you is to not marry if you want many women. Just have baby mamas! And they can be hell too.

People do crazy things but they are people anyway, what would you expect in this crazy world!