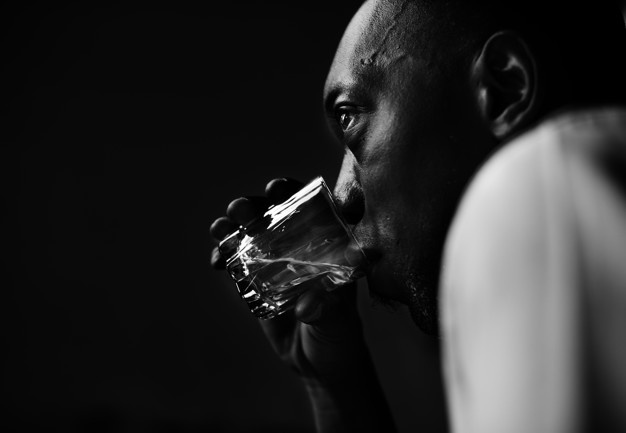 Everything else can go wrong, but not your mind. If you are sane and with a clear mind, you can at least think fast, figure things out and get back on your feet. The biggest concoction for depression is brokenness plus drugs on top of it. If you are broke and still high on drugs, I don’t know how you can help yourself in difficult times. Your pocket can take a hit, but not your head. With a good head on your shoulders, you will just move on.

Drinking or smoking are leisure activities that we do after payday or on a weekend after a long week of hustle. There are reasons people don’t drink on a Monday, because they are broke or they are at work. It is not the time for getting high, it is time for making a living. And when the business has been handled, you can now have a little fun.

It is insane when some people do it the other way round, they drink when they feel low and not in a good place. Alcohol is not for removing stress as the streets put it, it is for fun times. When you are stressed, you should be drinking a lot of water, not liquor. Alcohol doesn’t solve problems at all. I have never seen someone who got high and his problems vanished just like that.

Drinking is very expensive, a broke guy who likes alcohol or drugs is not different from a broke person who likes an expensive lifestyle. The latter will soon get into debt while the former will soon fall into depression. Brokenness happens, even to the best of us and there are many ways people handle it; by looking for solutions that work not watering down their sorrows.

If your income is small, drink once a month. It is difficult especially if you enjoy an occasional beer with your buddies but there is no reason to be drinking every week if you don’t have a good income. You want to engage in things that add to your income not reduce it. It is simple logic that drinkers don’t get. The really capable drinkers have a minibar at home. They stock it once a while and that is it. Now, those who have to regularly buy need to watch how much they are consuming lest they overspend. Once or twice a month is possible.

I consider being of clear head as the first step to solving all your money problems. Intoxication is just a bad recipe for solving issues. However, being broke depends. Some people consider having 10k to be broke, which means that even when broke they can still afford a Jack. I therefore wouldn’t say that if you are broke, you should be sober. I just suggest that if you ever go broke, drinking is one habit you will benefit from cutting off.

I honestly pray you don’t go broke, but should it happen, just maintain your sanity. I am almost becoming a champion of mental health. It is the mind that controls every aspect of your life.  Even if you have money and you are in a bad state mentally, it is equally bad if not dangerous. You can easily destroy yourself if you have paper and you are depressed or hooked on hard liquor.

A man’s biggest weakness is going broke, forget any other thing. If you are broke everything stops, you can’t even buy water to drink, the second weakness is family if you have one. If you have kids that’s a big concern to any man. I don’t even know why I am talking to you about being broke as a man, I can even go a step further and state that you can’t afford to be broke if you are a man with a responsibility like family. I feel scared for my friends with kids when they talk of being broke, you should be anti-broke. I hope you are not dead broke with credit cards reading negative; you can still afford to move around and get things done.

The Christmas season is here, I think this will be one of the most laid-back Christmas we shall ever have. The way Covid hit people this year I don’t expect to see so much spending. Covid taught everyone a hard financial lesson, and that means the coming month of January might not be as bad for many people as it is usually the case, I said “I hope” not “I know”. You can be surprised if people go hard on Christmas just as usual. People are weird when it comes to habits, they don’t learn. You can’t change people even with a pandemic.

As I said, if you ever spend during this December and find yourself going broke come January, just remember to be sober.

To a sober December!