What Makes a Man Boring? 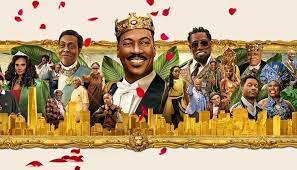 I didn’t watch the first ‘Coming to America’ till the end but that does not stop me from reviewing the second one. I have reviewed Game of Thrones in the past so let’ see about this. I have to review this one because it is comical in the plot and the actions. I run a comedy blog so it will be a review worth doing.

First of all the first one has higher ratings than the sequel on Rotten Tomatoes. The latter only has a 49 percent rating but I have always had a Lil beef with Rotten Tomatoes, their audience is mean when it comes to ratings. I have seen them underrate some really interesting movies.

What makes Coming 2 America a great movie? The cast.

I like the cast, they do a good job with a rather normal story line. Their attempts at humor are good and they manage to capture the social change that has transcended since the first movie.

The barbershop scene is good and relatable, it is what I would expect in a normal city barbershop. The dialogues are awesome and a little hilarious. They laugh at the king for coming back to America for his bastard son, a land where you pay a lot of child support as oppose to Africa where a king pays no child support.

The cast gets the west African accent right despite them being black Americans, but either way Most African Americans are from Nigeria and sierra according to history so they fit just right on the set with the accent. It is a convincing cast.

I have to give the casting director a thumbs up for the meticulous selection of cast.

Wesley Snipes is good as usual, he is sarcastic in a humorous way, making fun of King Hakeem’s weak territory that doesn’t have a male heir. He executes his role just well with his funny walking style and empty threats.

The plot is not out of this world. It portrays a paternalistic African society that seems to be troubled when a family doesn’t have a son to take over the leadership position. And the women in Zamunda are not allowed to own businesses.

African has advanced a great deal in terms of infrastructure and civilization.  If a kingdom is to be surrounded by a park of wild animals, then the king can’t have a royal jet like it is portrayed in the movie. Some things about the storyline don’t add up.

Eddie Murphy, who plays the lead role is cool. He doesn’t seem like what a normal king would look like but he does a good job bringing the character to life.

The ladies in this movie are fire and they behave exactly like what an African woman from Uganda or Zamunda would be like when pursuing a wealthy prince.

They are compliant and very sweet. Their dance routines are great and they can sure pass for a modern African woman.

I don’t like the idea of arranged marriages just like prince Hakeem doesn’t. The through pass guys and hommies who like matchmaking might enjoy these types of affairs but not me nor the prince.

You can see that they don’t work from the movies. I don’t know if they work in real life.

Wesley Snipes is really pushing for one of his daughters or sons to be married to the royal family but it doesn’t seem to be working out. He is threatening to attack that kingdom with his army if that doesn’t happen.

The cast is star-studded with cameos from Rick Ross, Michael Blackson and just a bunch of nice artists you can think of. As a small-time actor, I wouldn’t mind a role in such a film. I enjoyed the humor and satire. There is a dry sense of humor throughout the film.

The themes explored are just good; it is what you would expect from modern African society.

I didn’t finish watching the first ‘Coming to America’ so I can’t make many comparisons. I was once in a friend’s house and she put it for me to watch but it was getting too late and I didn’t go far with it. For this one, my neighbor gave me his external hard disk drive to download some things and I saw this movie there and I decided to copy it and watch it. It was something good running into.

I would just say not bad for a sequel. Most sequels or even song remixes don’t usually hit as hard as the original version. It is a good attempt.

The box office earnings are fair too. If you haven’t watched it, be sure to check it out.