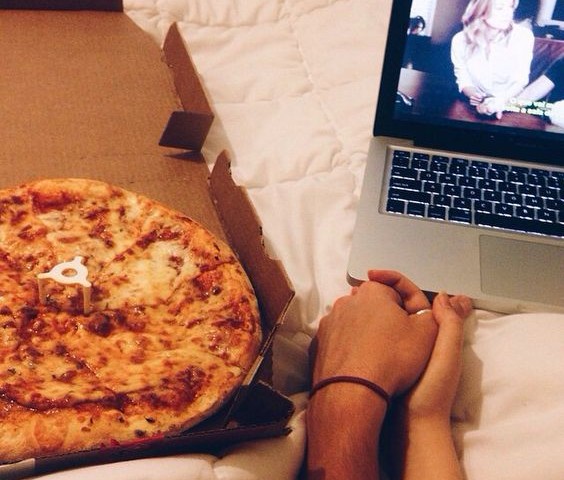 Coffee dates are overdone and cliche, in fact they have been called out as boring. I will say non-creative.

Clubbing is noisy and not the perfect chill out zone after a hectic week…unless you are a party animal. I like it when people are sober.

Hiking, road trips etc are very tiring and needs lots of planning plus they consume too much energy. How many Nairobians even do those anyway?

That makes Pizza and Netflix the perfect chill out partners in this busy city.  I will add that you need a comfortable couch and a soft blanket to accompany that. After a long week of going out to hustle, the last weekend plan would be to go out again for fun. I am writing this for the employed guys who work in offices and have to hit the road everyday. I work from my pad, with my laptop on the floor, specifically on my red carpet so going out is still okay with me. When I was in occupation, I would avoid going out on weekends because I wasn’t even enjoying my rent in the first place. I would pay for housing but rarely get to stay in the crib. That’s normalcy in the big city though. It is common to not even know your neighbors, I am embarrassed I didn’t know my neighbor’s name for almost three months because of staying out late. I asked some hommies too and they confirmed being in the dark about whoever lives next-door to them. You think it is pride and arrogance? Naaah, it is just the modern lifestyle. Money making gets in the way of things.

We are so involved in our worlds that we rarely recognize what and who is around us. I blame smartphones too for this.

I chose pizza and Netflix because they are still classy and affordable. And non-complicated. If you just choose the right pizza, like the one with corn and of course with lots of entertainment on Netflix, I am sure your weekend is perfectly covered. Pizza is just delivered at your doorstep. I won’t say who has the best pizza, that is for you to find out, everybody has their own taste but I give it up to Domino’s. It is a Tuesday so let me praise pizza and Netflix on how they have changed the dating scene and hangout plans in this digital society. These two stuffs should be considered some of the greatest inventions of the 21st century alongside WhatsApp and IG. In the old days, guys would just do late movies and popcorns in cinemas but that has been replaced by pizza and Netflix.

Going out for cinema would be great back in the days of yore but with the current size of screens I have seen in some houses, I don’t think you need that cinema experience. Netflix is way affordable and with lots of options for entertainment. You can be watching celebrity gossips and reality TV shows with your girl. They are good for making good conversations. Or you can be following money heist with your hommies. I like action packed series and Netflix has been churning them out consistently.

Pizza is bae, I had my first bite last year and I kind of liked it. I shun away from modern food but pizza has revolutionized our diet so much. I rarely take it but it is good for filling the stomach and just kicking back on a calm Saturday.

So until next time pizza and Netflixin’ guys…