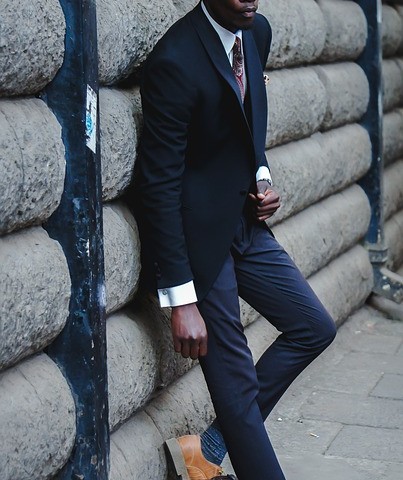 I am glad with the reception you guys gave to the first episode of my slaying series, I have received good reviews and I appreciate that (Dj Khaled’s voice). In case you missed it, you can just click here and catch up with it. It is not a long article though but I still decided to make it look like a series, I have been watching lots of series of late and it’s slowly rubbing off on me, everything I do is in series, I am even dividing my workouts into two parts, cardio first then weights second, my lunch and breakfast too have been divided into halves. Anyway, we left the previous episode with our slay king getting some nice haircut in an executive barbershop in some cool part of the city, leave alone the local barbershop that leaves you with pimples on your chin after shaving. Shaving joints have gone to the next level considering that just the other day my mum was shaving my head with scissors in the village but nowadays you walk into a barbershop and you are served with wine, pop corns, coffee and such as you wait for your haircut…damn! some slay kings even have highly rated stylists that you can’t see without an appointment. Imagine making an appointment just to have your hair cut, count me out of such, I will just shave at my local and life continues.

Fashion fashion – I have to stress on that because it is the epitome of slaying, you have to nail this if you ever have dreams of joining the slay club. Considering that most slay kings are Migos fans, they rock the latest designs from some designers whom you can’t even pronounce their names…you know Amiri, Balenciaga and stuff…I bet 2pac and snoop fans can’t be slay kings with them baggy jeans and black hoods…pac himself said it in a song called thugz mansion “niggas ain’t gotta all dressed up and be hollywood y’knahmean”. Stuff like backpacks and umbrellas are part of their wardrobes. The old saying is that you can tell a man by his shoes but I say you can tell a slay his clothes and choice of music and that means techno, trap and the likes.

I can say their choice of music has influenced their foreign accent because music makes you a good listener. They don’t have to speak like white guys but you will definitely notice that British school accent in some of their words. My WhatsApp friend Mike speaks that kind of English with a very clear diction, you know that English newsreader speech – exactly. If you happen to have a heavy accent, you still have a long way to the slay mansion.

To wrap this up, I think that just like every man should at least date a slay queen at one point in his life so should every girl grab herself a slay king, although they are few considering the tight criteria I have laid out for you to follow. Slade jeff is too hard for the bourgeois lifestyle though…I prefer remaining the traditional man.