A Neat Freak and a Dirty

Neediness is the Biggest Attraction Killer 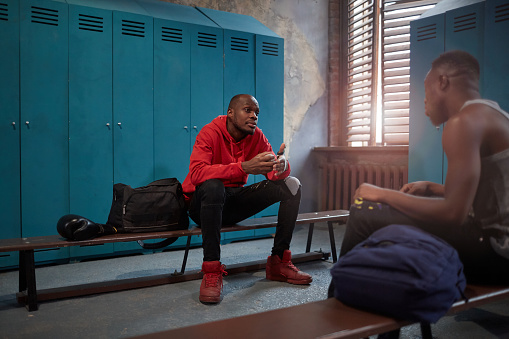 Talking about boys locker room talk is a no-no, it is a brotherly talk that is not always supposed to get out there but it does sometimes. That is quite unfortunate since your entire clan can be ashamed of what you hide in your subconscious when locker room talks leaks to the public.

They say walls have ears but not for locker rooms. In fact, locker room walls should be soundproof. The things we say as men remain just between us.

One of the worst locker room talk leaks was of Donald Trump’s “grab them by the crotch” tape. It almost tainted his image as the remarks were considered borderline sexist and even misogynistic.

That shows you how deep the rabbit hole goes when it comes to locker room conversations.

The deeper you get in your conversations with people, the more secretive it should be. Boys’ locker room talk is not even personal, it is penetrative by every definition of that.

However, all the changing room talks I have been part of have been quite an eye opening on a lot of problems men harbor out here.

I am always shocked by some of the things people carry in their hearts out here. I always think I keep big secrets but not until I listen to what men are going through. It is disheartening at times.

I pity most men.

Most men don’t trust many people with their emotions lest those same people turn around and use that against them.

You can trust your boys not to leak the conversations, you are not Trump or some prominent personality.

Locker room talk is for letting out all the dirty little skeletons in your closet. Just make sure you don’t have lame boys around you and all the talk will remain within your circle.

The problem with socially uncalibrated men is that they don’t know they lack some social skills. They will go around spilling all the beans and airing your dirty linen in public.

That’s not a problem if you are stoic and unmoved by what people think about you. I have a friend who tells me that if you care so much about having a good image, you can easily become sensitive to gossips and shades.

I care about my image, it is noted that real men care about how they are perceived by the outside world.

However, I am shameless and don’t let things embarrass me. That’s what is advised for men, don’t cower when people try to shame you for opening up, and it is said things are only embarrassing if you let them embarrass you.

Any man who tries to shame other men or embarrass them for no reason is a sucker. And probably a pretentious holier than thou soul who acts as if life doesn’t happen to him.

They say PR is for pretenders, real people don’t need to manage their image. I say image and reputation management is for anyone who cares about their life and the opportunities they need.

Everything is on reputation, and you ought to guard yours selfishly.

It is very hard to get rid of a bad perception once it goes into people’s minds that you are a certain way.

Put your radar on for witch hunters who might launch a smear campaign against your name if you get into a disagreement and don’t engage them in boys’ locker room talks. They might be vindictive.

Most people are rather cool and would let go of that relationship which doesn’t work out. They won’t leak your boys’ locker room talk.

Another important aspect about boys’ locker room talk is that it can’t leak unless you tape it.

When the Trump tape leaked, I wondered why they even taped it. Who makes tapes of boys locker room talk?

Boys club is not a place for boys locker room talk. Don’t confuse the two. Boys club which I talked about a while is a medium to just bond, not a place to discuss personal things that need face-to-face communication.

I thus advise you to keep it in the locker room, and even lock the doors, these walls actually have ears.