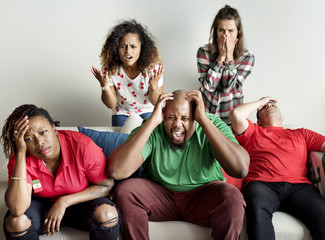 There will always be losses and wins in this life. Even the best team in football doesn’t always win the champions league or super bowl. You can minimize losses in your life but if you are supporting these teams, they disappoint at one point or another. Don’t bet on them if you don’t like losing, just don’t put your money on a team because winning is not a guarantee in highly competitive games like rugby, football, or basketball.

Most fanatics have a problem with handling a loss when their team gets beaten. I see my friends crying on WhatsApp every time their teams are beaten. That’s life, first of all, don’t be sad.

There are good days and there are bad days. It was just a bad day in the field for you and the team. I don’t like heartbreaks especially on a weekend, that’s why I don’t support the sports teams.

Weekends are for unwinding why would I allow a team to destroy my resting days? However, I understand some of you bros and sisters are so much into these teams that you can’t even think of living without them.

I don’t know where you got the love for arsenal or Manu from, but all I can say is that it is not a life or death thing, it is just a match, and there are bounds to be causalities.

It is like going to war, when a team of military guys plans to invade a territory; they carry body bags just in case someone catches a stray bullet. They know they will kill the bad guys but they also expect to get something back, they pray they don’t though.

They are always prepared for the worst but hoping for the best.

That’s a bad example because I just said in the paragraph before that it is not usually a matter of life and death, and I am there on the next paragraph talking about the grim reaper, forgive me, dear reader. I just wanted to paint the picture for you.

There is only one simple way to take an L. and that is understanding that it happens to the best of us.

I don’t know how to avoid losses. If you don’t want them just be another Floyd Mayweather. Do you know how Floyd has avoided losses in his life?  A series of wins.

Psychologically, if you have a winning streak, it gives you a winner effect that ensures you will win in the next round. You get a testosterone boost every time you win in anything even an argument, and many doses of testosterone are good for boosting your performance.

That’s too much psychology for you, just forget about it because a loss can come from many forms not only in a football game or a match. Even in life, there are bound to be some losses.

Do some companies report zero losses? I am not so big on numbers so I can’t know for sure, I am a wordy person but I know some companies win so much that losses don’t even matter. It doesn’t hit hard.

If you have been winning for a large part, the losses become insignificant. And that’s an important part of this thing. Have a habit of winning but also understand that you won’t always catch all the birds.

To take the blame or not? when there is a loss in a team or a football game, I don’t want you to be so quick in taking the blame. It is not the time to take one for the team.

Callous people are always quick to point hands and put the blame on others, don’t be easy to blame. You might turn into a punching bag. You will end up carrying the weight of the world on your shoulders.

If you are keen you will realize that sometimes not everything is because of you. I am all about taking full responsibility for the outcome of things but if Arsenal or Liverpool lost a match it is not because of you.

If you lose a loved one to cancer, there is nothing much you could have done even if you were the doctor; it is just an incurable disease at times.

You played your part in the situation but like with anything, it is not practical to have absolute control over things.

As long as you did your best, don’t be a sour loser. The truth is that losing sucks. It sucks so bad that very few people are strong enough to take it.

You have seen how people behave after an election or a tough football match. The cursing, the violence, or the abuse that gets thrown about most of the time is because someone doesn’t want to take an L.

Pycho guys get violent when they realize they are losing. Be careful with people who are losing too. They might just drag you down with them when losing.

Some nasty guys don’t want to lose alone, they feel like they have to pull everyone along with their loss or they will just push the blame to the other party. In worst cases, people go to court to challenge a loss.

I don’t believe in using the courts when you lose, you look bitter unless it is clear that the loss is unjustified and the court is the only option you have.

Even lawyers will tell you not to run to the courts when you get a loss. If you have misunderstandings with people, try solving things outside the system. There are agreements you can reach without all the hustle of a judicial process.

As I finish, it is just human to lose at times, I lose my pens in the house a lot, I lose my time when someone wastes it. I have lost money on buying overpriced things and so forth.

There are those things once lost cannot be recovered like time, loved ones, or your hair. Avoid losing these things at all costs. Don’t let your hair fall man; apply hair food on your head. And also don’t lose your time playing play stations or just doing funny stuff, make good use of your days on this rock.

And if you lose your hair just go bald or get hair implants if you are still in denial. I swear when you get old in life, you just start losing things like hair, and even sight. Visit doctors when your vision become blurred, but don’t ever lose your focus. Your sight and foresight are both important.

I am out of this.